Gangoobai is 2013 Bollywood drama film, produced by the National Film Development Corporation of India and directed by Priya Krishnaswamy.[2] It stars Sarita Joshi in the lead role as Gangoobai.

The story is about an elderly maid servant who works hard to achieve her dream of an extremely expensive Gara sari and changes the lives of people she interacts with while in Mumbai to buy the sari. The film was premiered at MAMI 2012, in the New Faces in Indian Cinema section; the South Asian Film Festival in Canada; the Hanoi International Film Festival in Vietnam and the IFFI 2012.[3] 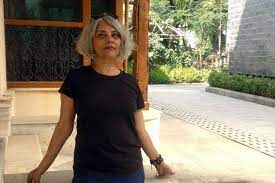 Priya Krishnaswamy is an alumna of the Film and Television Institute of India (FTII), Pune, where she specialised in film editing. She is a 2-time National Award-winning Indian film producer, writer, director and editor who works predominantly in Hindi and Tamil cinema. In 2004, her English language documentary film, ‘The Eye of the Fish – the Kalaris of Kerala’ won the National Award for Best Arts / Cultural film. She made her feature film directorial debut with the Hindi film Gangoobai (2013), which was a product of NFDC’s acclaimed screenwriters’ lab in 2009. She wrote, edited, directed and produced the Tamil language thriller Baaram (2020) which won the National Award for Best Tamil Feature Film in 2019.