About No Time, Son

The movie is about Ajay and his 6yr old son Addu. Addu loves his father and wants to play with him every day, however Ajay is always busy with work and doesn’t get enough time to spend with Addu. Everyday he promises Addu that he will take him to the park tomorrow but that tomorrow never comes. Will Addu ever get Ajay’s time? Will Ajay ever realize that how much Addu misses him? 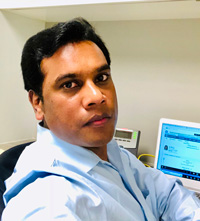 Aravind Jayanti is an Account Manager by profession, who lives in Ashburn, VA. Aravind is an avid movie buff and in his free time writes stories and screenplays. He is inspired by the renowned Indian filmmaker Mr. Mani Ratnam. His stories and the characters are real and related. Human emotions is what drives his writing. He did a Film Making course from NJ Film School and while he attempted to make short films couple of times in the past but couldn’t finish the projects as expected. No Time, Son is his first successfully completed project. His dream is to get an opportunity to work with Mr. Mani Ratnam and learn the craft of fine film making. He is a trained singer and his hobbies include playing tennis and cricket.