After undergoing self-transformation therapy, a woman is stalked by an Indian classical dancer, forcing her to confront herself in a way she never expected. 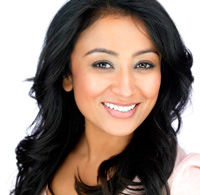 Filmmaker Gayatri Bahl (also an actor, dancer, entrepreneur) always dreamt of playing fierce, gritty roles that weren’t the typical ‘girl next door’ fare. Starting in Bollywood, and then eventually moving to New York City, she felt deeply unfulfilled with the types of roles that she was going out for. That’s when she decided to write and direct her own films – because “if you don’t tell your own stories, no one else will.” As an actress, she can be seen in Rearview Mirror (Tribeca All Access Project), Vinyl, Law & Order SVU, the Hindi Film Let’s Dance, and Rishta.com (Netflix). As an Indian Classical Dancer, Gayatri has performed at Alvin Ailey Citigroup Theatre, SummerStage, NJPAC, Lincoln Center and has been featured in Elle Magazine’s Movement Series. Gayatri studied Theater at Emory University and now trains at the Folster Studio in New York City.