An Indian-American mother’s worst fear rises to the surface when she is the victim of racial abuse. 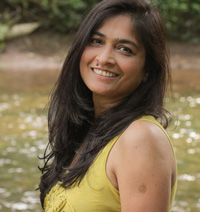 Five O’Clock Shadow is Sangeeta Agrawal’s first film as a writer and director. She has been a stage actor for over 30 years and has acted in several short films in lead roles. Her films have been screened at numerous festivals, both in the U.S. and abroad. Her film, A Good Match, was screened at the Delhi International Film Festival where she won the Best NRI Actress award.