About Azaad – Presented by Mira Nair

Set against the socio-political backdrop of present day India, Azaad unfolds the story of a dysfunctional relationship between a father and his son, within 48 hours of the father going missing. Azaad is presented by prolific filmmaker, Mira Nair, and has been written and directed by her long-time associate, Rahul V. Chittella. It features the National Award-winning actor Atul Kulkarni (Hey Ram, Chandni Bar, Rang De Basanti) playing the lead along with Sakshi Tanwar (Dangal), Siddharth Menon (Peddlers, Happy Journey) and Nandu Madhav (Harishchandrachi Factory)

Selected for screening at UNESCO during World Press Freedom Day 2017

Selected for screening at UNESCO during World Press Freedom Day 2017 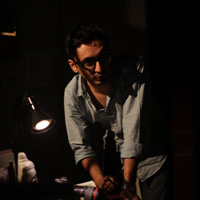 Rahul V. Chittella is an independent producer and director based out of Mumbai, India. In 2009, he was the director and executive producer for the Global Lives Project, India. He then worked with the United Nations Documentary Program at the United Nations headquarters, New York City. In 2010, after having written and directed a few short films and music videos at his film school, Rahul directed his thesis short film titled Muted, which was screened at international film festivals. He was awarded the Media Citizen Karmaveer Puraskaar in India for his contribution to projects that have used media for social change. Since 2010, Rahul has worked with the prolific filmmaker, Mira Nair, as her creative associate and producing partner in India on projects like The Reluctant Fundamentalist, God Room (part of Words with Gods), and Nafas. The Reluctant Fundamentalist premiered as the opening film for the 69th Venice International Film Festival, and at the 37th Toronto International Film Festival. Rahul is the writer and director of his debut short film titled Azaad which is being presented by Mira Nair and features acclaimed actors Atul Kulkarni, Sakshi Tanwar, Siddharth Menon and Nandu Madhav.