Desire to live with Self esteem and pride awakes in his heart. When thinking of a person starts changing that thought affected his society as well . Then, along with the man he seems to change the society. In our film “Beggars” a boy has changed the attitude of his beggars society .He taught them and People of his age to live with dignity and pride. 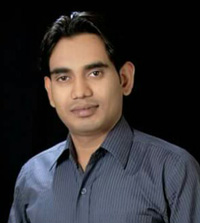 Ram Prasad Mandal born and brought up at Jharkhand,India. He did graduation from RSP College Jharia. Then he moved to Delhi for his dream. He did Theatre or Street play in Delhi and study about cinema. In 2010 He went to Mumbai and started working as an assistant director in T.V serials and Films also. He worked seven years in Bollywood with several productions house. In 2016 He has written & Directed three short films. Dada ji ki Diary, Switch Off, Beggars..All three films have been selected in 31 International film festivals.He got Best Childrens Film Award for his “Beggars ” film. And Best Asian film Award for “Switch off ” film.Ram Prasad went to Iraq for Al – Nahz International Film Festival. He interacted with International media over there.