About Lipstick Under My Burkha

Trapped in their own worlds, four women claim their desires through secret acts of rebellion In a small town in India. A burkha-clad college girl struggles with issues of cultural identity and her aspirations to become a pop singer. A young two-timing beautician seeks to escape the claustrophobia of her small town. An oppressed housewife and mother of three lives the alternate life of an enterprising saleswoman. A 55-year-old widow rediscovers her sexuality through a phone romance. Caught in a conservative society, these women set forth to break the mold, in search of a little freedom. 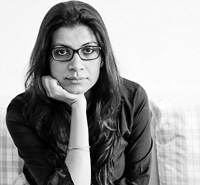 Alankrita Shrivastava is a feature film director and screenwriter from Mumbai, India with a penchant for telling women’s stories. She likes to explore the complex, interior world of women through her films. Alankrita has written and directed two feature films – Turning 30 (2011) and Lipstick Under my Burkha. She has worked on several Indian feature films including Raajneeti as an associate director and Khoya Khoya Chand as an Executive Producer. She has also director short films, documentaries and music videos.