About Son of Kali

Fleeing a genocide against Hindus in Bangladesh, Probir reaches India in the middle of a major Hindu festival. An evening of intense religious euphoria follows and Probir feels he is like a child in a religious Disneyland. He is being accompanied by his childhood Muslim friend Anuar, who is enjoying the Hindu festival in his own hedonistic way. But Mother Goddess has other plans for him. 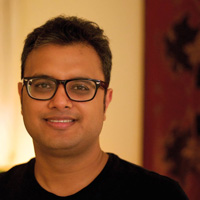 Amit Agarwal spent his formative years in Kolkata, India. After an MBA from a premier business school in India he worked in the agricultural sector in Africa, India and Europe for over 10 years and decided to pursue his passion for cinema. He assisted Mr Girish Kasaravalli, the master Indian filmmaker on his acclaimed National Award Winning feature film “Kurmawatara” (The Tortoise, An Incarnation). He was the associate director to Mr Kasaravalli on a documentary based on the films of Mr Adoor Gopalakrishnan called “Images/Reflections”. His first short film “Ek Khaas Aadmi” 2015 (A Special Man) premiered on NDTV Prime Channel. His feature film script “A Long Tunnel” was selected for the prestigious NFDC Directors lab in 2014. He pursues “Film Evangelism” at mostlycinema.com and gives public lectures on Indian Cinema.