An under-appreciated, slightly emasculated father of two is going through the general humdrum of middle class Indian life. Until one day, in front of many, he is unexpectedly thrust into the spotlight, making everyone around see him like never before. 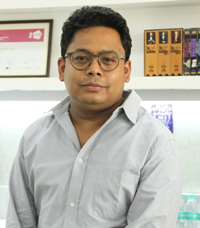 A director, producer and distributor, Shiladitya started his film journey by conceptualizing and setting up PVR Director’s Rare, the limited release banner of PVR Cinemas, India’s largest cinema company. He served as the first CEO of award-winning indie studio Drishyam Films and was instrumental in green-lighting Newton, India’s official entry to the 90th Academy Awards in 2018. Backed by over a decade of solid industry experience and an undying passion for the movies, Shiladitya is now spearheading Platoon One Films aiming to provide a class act in film production, marketing, distribution & syndication. His maiden independent production ‘Your Truly’ premiered at the Busan International Film Festival 2018 and was acquired by Zee Entertainment Enterprises Ltd for worldwide distribution.