The perfect life of a happily married couple is shaken when they realize they cannot have the one thing they desire the most. By a twist of fate, they get what they want but something invaluable gets taken away. 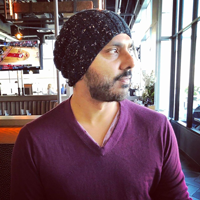 Rishi Kumar is a writer, director, and photographer based in New York. He is a graduate of New York Film Academy directing program. Previously he has worked as an actor and also anchored a travel show for Star One channel in India. ‘The UnExpected’ is his debut film. He has a background in Finance and Technology and has held Executive Director level leadership position in Investment banking.