A mystery man holds Thomas in captivity and takes him to their haunting past which brings emotional distress in their minds. Thomas tries to escape which goes awry in an unexpected dimension that leaves him with no choice left in his life. 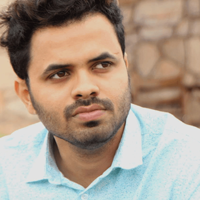 Mr. Ganesh is a computer software engineer by education and profession. He is a passionate filmmaker and an actor who likes to try out bold and socially impactful subjects. He started his filmmaking career by being actively involved with a bunch of small video productions until he made his professional attempt with his maiden film “Chained”.