Gurwinder Singh is an actor who is struggling to make his mark. His identity of a Sikh has only made this struggle tougher. This is a bigger question about the identities we are born with and the occasional delusion that a dreamer seems to live in. 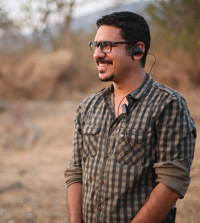 Mayaram is an adopted screen name of the Writer and Director Varun Sihag. He is originally from Rajasthan state of India. Currently he works in the Mumbai film industry as an independent film maker. He has worked as a ‘clapper boy’ in the Hindi movie ‘Jal’ which was released in the year 2014. He has also worked as the ‘Script Supervisor’ for the Academy award nominated film maker Ashutosh Gowariker in his movie ‘Mohen Jo Daro’ which was released in 2016. He is a poet and an occasional blogger.