About Through Fish Eyes

Join Prakriti Dance (a Maryland based Bharatanatyam company) as they journey from conception to creation of “Through Fish Eyes”, an Art/Science collaborative production that brings awareness to the dwindling state of our oceans. As they work towards their Kennedy Center premiere, the dancers use the vocabulary of Bharatanatyam to bring marine creatures to life, and portray how overfishing, pollution, and plastic have ravaged the ocean to the point of no return. Humanity has been the hand of evil, but now can we be the hands of change? 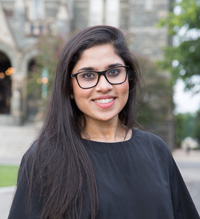 Madhavi Reddi is a multimedia artist and current PhD student at the UNC Media and Journalism School who seeks to create cultural dialogue through her work. She uses her background as a filmmaker, photographer, and media studies scholar in conjunction with her background in Bharatanatyam and Indian classical music to encourage others to think about the profound role of art and media in our lives. In 2015, Madhavi premiered “What’s Your Name?” a short film co-directed with Anuj Gupta, about Indian American identity, at DCSAFF. She is excited to premiere her work once again at DCSAFF, this time, a documentary about how Prakriti Dance (a Maryland based Bharatanatyam company) uses the vocabulary of Bharatanatyam to convey messages about ocean conservation and plastic pollution.