Life is a mixture of reality, dreams, thoughts and hallucinations. An aged lady living alone in a remote village is prone to all this.
After the early demise of her husband, the protagonist of the story Bhanu brought up her two sons all by herself. When the sons got married they moved out leaving Bhanu alone in her husband’s ancestral house. 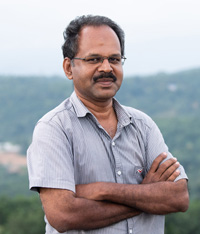 An alumnus of Film and Television Institute of India(FTII), Pune is active in visual media for the last 22 years. He has scripted and directed around 30 documentaries, short flms and docu-fiction serials. Several of which have won awards and critical accalim. ABODE (IDAM) is his first feature film. Critically accalimed ‘Leave No One Behind’ is a short doumentary scripted and directed by him for Leonard Cheshire Disability, UK about the disabled children in Bengladesh. Awards won include National Human Rights Commission short film Award 2018, NCERT Best direction Award 2018, National Science Film Festival Award 2018, Kerala State Television Awards 1999, 2016and 2018. His works include ‘Khalasis of Malabar – Men who move mountains’, ‘Kerala Kaleidoscope’, ‘The War’ and ‘Morning Visitors’.