About For Love with Love

Bhalobasar Jonye, Bhalobasar Songe (For Love with Love) is a tale of Sonamoni, a married daughter who is sincerely taking care of her mentally unwell dad Parag Da. 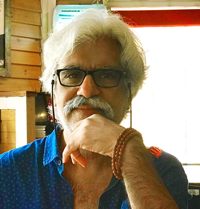 While making short educational films for his school, he got introduced to Bollywood and the small child in him who was forever an interesting story teller with god gifted talent to draw and paint finally decided to shift his base from Delhi to Mumbai. After having waited for almost 9 months without any work, he was fortunate enough to meet India’s ace producer and director Mr. Vidhu Vinod Chopra. He joined him as a trainee but by pure devotion and dedication, hard work and intense interest, he became his 1st Assistant Director for the magnum opus ‘1942 – A Love Story’. Just after that, today’s well-known film and music director Vishal Bhardwaj who was making a tele-film ‘Dhain-te-Dain’ for ZEE Channel, asked him to play the ‘common man’ in it. Manav Kaushik who did short film related courses in the US and in India, came in contact with Hungarian Director Istvan Gaal at the F.T.I.I. who taught and trained him further privately. Manav Kaushik who has more than 400 film based TV shows to his credit as a researcher and script writer, is an incalculable thinker and is involved in talks, does hold film based workshops and works as a ‘script doctor’ for film projects.