About Bulbul can sing

Bulbul a teenage school going girl, growing up in a rural setting in Assam, falls in love. While she is in the verge of discovering her teen life, a tragedy strikes with her best friend. Bulbul free spirited, rebellious and stubborn begins to question on herself and her love life. Teenage, love, secrecy, mixed with passion and mindless societal dogma and yet speaks about survival and freedom. 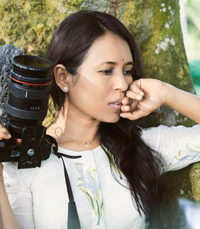 Rima Das is a self-taught screenwriter, producer and director who also takes on the roles of cinematographer and editor for her films. Born and raised in a small village in Assam in northeast India, she is now based in Mumbai and Assam. She is the Managing Director of Flying River Films which supports local, independent filmmaking in the region.

Best known for making indigenous and realistic films with non-professional actors, her films have been striking a chord with people not just in India but across the globe.

VILLAGE ROCKSTARS, Rima’s second feature film premiered at Toronto International Film Festival 2017, then travelled to more than 80 film festivals around the world. The film has received over 50 Awards including the National Film Awards as the Best Feature Film in India 2018 and Oscar entry from India 2019.