A spiritual and emotional journey of a burned out British video editor Danny, as he travels to the same beach town in Goa(India) where his hippie parents had met back in the 70’s during the heydays of hippiedom. 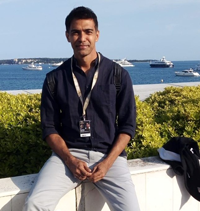 He was the director, screenwriter, and producer of “Danny Goes Aum”. ”Nirmal Anand ki Puppy’ is the fourth feature film from writer-director Sandeep Mohan, an independent-spirited filmmaker based out of Mumbai, India. His previous films are “Love, Wrinkle-free”, “Hola Venky!” and ‘Shreelancer”. Built on his penchant of telling stories woven around keen observations on social behavior and norms, his films have garnered critical acclaim as well as a cult viewership. He is also known for his unconventional way of reaching out to his audience through his ‘Great Indian Traveling Cinema’. In addition to the traditioanl ways of broadcasting – theatrical, satellite/digital – he takes his films directly to the audience to selected venues in cities around India and abroad. So far he has done over 125 such screenings in around 30 cities around the world.