Mera Daddu is a heart-wrenching story of a grandfather and his grandson, Aslam, who was orphaned in communal riots. 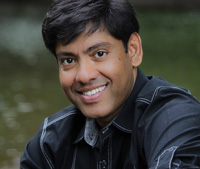 Sri Mirajkar makes his directorial debut with the short film, Habaneros. He is a seasoned actor with a passion for theater and film-making.

Sri has acted in several lead and supporting roles on stage, in film, and on television over the past 25yrs. He has also been awarded the Best Actor at the World Music and International Film Festival, 2018. Recently he played the lead role in the real-life TV crime serial, Evil Stepmothers, airing on Investigation Discovery Channel (Season3:Episode3). He has acted in the Bollywood feature film, Partu, which was released in Mumbai and US. Sri has also directed a full-length stage play, Draupadi’s Arranged Marriage, which was staged at the DC Fringe festival in July, 2018. He can be found on IMDB as Sri Mirajkar