About Mishing (The Apparition)

An Army deserter grows roots in the Sherdukpan community of Arunachal Pradesh and suddenly disappears only to resurface decades later, and once again vanish behind a curtain of curious questions. 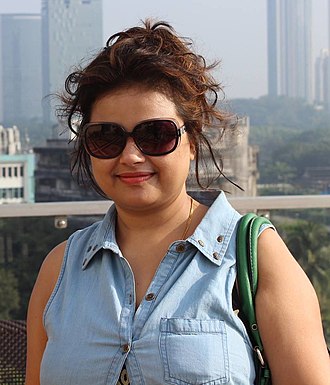 Dr. Bobby Sarma Baruah is a National and International Award winning Indian Film Maker, Producer and Screenwriter whose narrative content on socio-cultural issues in Assam and the North East has been highly appreciated. Her debut feature film Adomya in which she explored the sensitivity and emotional world of women was awarded the best film in the spiritual category at the 13th Dhaka International Film Festival.

Adomya was also screened as an official selection for more than eighteen International Film Festivals across the world.

Her second venture, Sonar Baran Pakhi, a biopic based on the life and time of the folk singer Late Padmashree Pratima Barua Pandey of Assam has been included as an official entry at various Festivals besides winning the Grand Jury prize for the best feature film in the 15th Indian Film Festival of Los Angeles and the best audience choice award at the 15th Dhaka International Film Festival. This movie was also screened at 24 international film festivals around the globe. Her third feature film is Mishing (The Apparition), which own her the Silver Lotus Award (Rajat Kamal) in the 66th National Film Award. The film is in Sherdukpen language and based on the novel Mishing, written by Yeshe Dorjee Thongchi. Mishing (The Apparition) was selected in 24th Kolkata International Film Festival, 23rd International Film Festival of Kerala and it screened almost 20 other international film festivals in around the globe. Baruah completed her shooting in her fourth feature film, Sikaisal, which is now[when?] in post production stage.

As a director, producer and scriptwriter, Baruah has a number of short films, documentaries, music videos and TV Serials on various indigenous folk cultures blending into one, to her credit. She is also an accomplished poet and a short story writer in the Assamese Language. She has also served as a juror at the Prestigious 14th Dhaka International Film Festival (2016), Lucknow Children’s International Film Festival (2016), Served as juror at 8th National Science Film Festival of India, 2018.. Served as a juror at the Hiru Golden Film Awards. She was also awarded the Senior Fellowship from Ministry of Culture, Government of India on the Topic “Ethnic Jewellery with attire of the Eight States of North-East India”.

Dr. Bobby Sarma Baruah completed her Ph.D from the Department of Mass communication and Journalism, Guwahati University on the topic “Reflection of the folk culture of Assam in Assamese cinema”.