In a city haunted by unending cycles of violence, turf wars, ethnic and class divisions, blossoms an unlikely romance. Shahbaz (Fawad Khan), the protégé of a drug lord, meets Parveen( Amna Ilyas), the daughter of a powerful rival clan who has no inkling of the secret that Shahbaz harbors. Set in Karachi, Pakistan, Gardaab(Whirlpool) is an intimate portrait of a city torn by violence. It’s a story of the city’s inhabitants as they navigate through this violence, fighting to preserve their humanity. A gritty fast paced thriller, the film is also a tale of an unlikely romance that blossoms amidst this chaos. 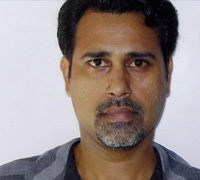 Harune Massey is based in New York and Lahore and has been working in the film and advertising industries in both the continents. He has been Assistant Director in leading films from Pakistan such as Good Morning Karachi by Sabiha Sumar and Zinda Bhaag by Meenu & Farjad. Harune has directed numerous shorts films, TV serials and ads. Gardaab is Harune’s first feature film as director.