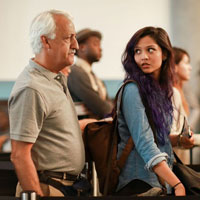 Fanny Pack is a comedy about a young Indian-American woman who wants to follow her dreams, and a fanny pack clad Indian father who chases his daughter through an airport hoping that she will follow his.

After attending her parents school and dashing their dreams of her becoming a teacher, Uttera moved to New york to pursue a degree in Journalism and Theatre Arts from Adelphi University. While she loved the craft of acting, she soon realized she wasn’t being offered roles that she found challenging. She decided to take matters into her own hands, and applied to USC’s School of Cinematic Arts. She recently graduated with a degree in writing and directing. Uttera divides her time between India and Los Angeles and enjoys having adventures and writing about them.