Raj was born without love lines on either of his hands, and has been doomed to loneliness ever since. One day he is granted the power to see people’s Zodiac signs, and he uses this to find the love of his life – only to realize that she’s with someone else. 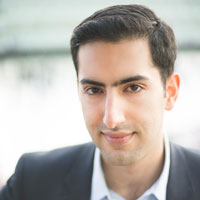 Kabir Chopra is an actor and filmmaker based in New York. He graduated with a BFA in dramatic writing from NYU’s Tisch School of the Arts, and has written and directed several short films. Recently, his short film Vanilla won the Special Jury award for Screenwriting & 2nd runner up for Best Film at the Asian American Film Lab’s 72 Hour Shootout. As an actor, Kabir has appeared in Madam Secretary and the feature film The Spectacular Jihad of Taz Rahim. This summer, he’ll be appearing in the web series MIDS, a modern adaptation of A Midsummers Night’s Dream. Kabir is also a screenwriter in James Franco’s Masterclass at Studio 4, where he will be writing a feature length horror film produced by Rabbit Bandini productions.