Sameera, a Central University student, accuses the captain of the University Cricket
team and his younger brother of sexual assault. She is quickly thrust into the spotlight
of media and social media as her motives and character are put under the scanner. 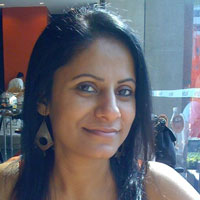 Geetika Tandon Higgins has a Masters in Film Directing and has been a media professional for the past 15 years. She has worked in the capacity of a Writer, Director, Producer, AD and Stylist for feature films, Ad films, television series, music videos, short films and corporate films. She has also been associated with leading film and media schools in India.

She was the Head of Student Productions at Whistling Woods International Limited (2007 – 2009) and the Head of Screenwriting for Balaji Telefilms’ academic venture ICE (2010 – 2011). In 2011 she joined Annapurna International School of Film and Media in Hyderabad as the founding Head of Academics and was instrumental in launching Bachelors and Masters degree programs in Filmmaking and a Media MBA for the school.