In this art film, Juhi is an aging prostitute whose son Kaku is wheelchair-bound. She finds it challenging to take care of him with the limited number of customers that now find her attractive. Debu, a not-so-successful lyricist, is dumped by his boyfriend, and is out on streets. These characters, in need of money and love, bump into each other, after which their lives take a similar direction. Their relationships, born out of mutual needs, change their perceptions about each other, which in turn brings a change in them—finally, a sunny day after days of merciless downpour. 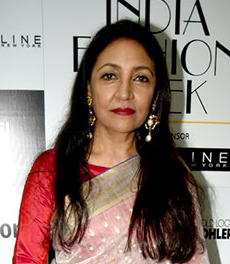 Deepti Naval (born 3 February 1952) is an Indian-born American actress, director, and writer, predominantly active in Hindi cinema. Her major contribution has been in the area of art cinema, winning critical acclaim for her sensitive and ‘close to life’ characters that emphasized the changing roles of women in India.