Mehta thought that Varma was the most fascinating artist of that era and his character, persona and paintings. He was fascinated with Ravi Varma right from his days at Film and Television Institute of India. After reading Desai’s novel, Mehta felt inspired to make a film based on the life and times of Ravi Varma, and set about formulating the story of his new film. He moulded and recast the script to project Ravi Varma as a radical painter, a strident advocate of the artistic license to depict nudity, and as a victim of conservative society. He felt that this positioning would help the film achieve more traction with the intelligentsia, and ease the path to awards and honours. Given that many of Ravi Varma’s paintings are actually used as icons of worship in Hindu homes, this positioning represents a major stretch of the imagination, a major effort at fictionalization. In fact, Ravi Varma was himself of conservative outlook whose paintings indicate that he had a strong preference for decently clad, soft-featured, ladylike gentlewomen and a distaste for brazen hussies. Very few of his works venture into the realms of semi-nudity, and these few forays seem to have been calculated, highly reluctant efforts on his part to appeal to a western audience. Even at that time, art appreciation in the west was in the grip of a progressivist mafia who cherished radicalism and disdained traditional norms. In the present era, Ketan Mehta dealt with a similar environment in India, and this informed the choices he made while developing the script of this film. Also, a simple, lineal depiction of Ravi Varma’s life and career would have given the film the look and feel of a documentary, which is what had happened with his previous film, Sardar. Movies require a narrative, as also a certain amount of drama and sensuality, and the script was developed to meet these needs. Mehta came across a relatively minor (and frivolous) court case which had been brought against Ravi Varma for allegedly depicting a Hindu deity irreverent in one of his paintings, and used this to develop a suitable script. 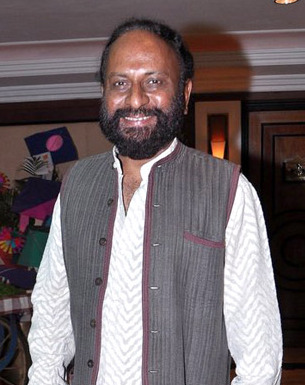 During his career, Mehta has made ten feature films, seven documentaries and two television serials – Captain Vyom and Mr. Yogi. His repertoire of themes includes comedy, satire, romance, violence and rebellion.
After graduating from the Film and Television Institute of India, Mehta joined the Indian Space Research Organisation as a television producer. There, he was given almost total freedom in what to create. In an interview years later, Mehta remarked about how influential this was to his development: “It was an incredible experience. Traveling all over Gujarat, meeting people, making programs on whatever you felt like, whatever you came across. It was real, genuine experimentation with medium, with people. That experience has been vital to films that I’ve made.” Mehta’s first film, Bhavni Bhavai, a Gujarati film, won him acclaim. His films have been selected for various international film festivals such as Nantes (France) and the Moscow Film Festival, where they have won numerous awards over the years. Mirch Masala was one of Mehta’s notable efforts, and won him the Best Film Award at Hawaii. It was released to 52 cinemas in the United States. Mehta has also had the honour of serving as a member of the jury in various national and international film festivals.
Mehta directed a biopic Sardar, on the life of Sardar Vallabhbhai Patel, in 1993. His latest two films Rang Rasiya, 2014 and Manjhi the Mountain Man, 2015 both opened to tepid box office and universally positive critical reviews. Manjhi the Mountain Man starred Nawazuddin Siddiqui.