Set in the 70’s in rural India, four 9th grade kids were writing their destiny. Joshi (14) is in love with Shirodkar (14), a beautiful girl. Both go to the same school, and study in the same class. faced with the age old question “What is love anyway?”, Joshi goes through a series of events just to let the girl know about his feelings towards her. Joshi’s friends on the other hand are going through the same phase of life. The difference is all four of them come from a different cultural and family background.

Surya (16) is a typical life lover and a great blend of society and hippie culture. Chitrya (14) a born genius and wants to be a scientist. He comes from a modern family setting and is the smartest one amongst the group. Favdya (15), the poorest, is the dumbest amongst all four. Joshi (14) comes from an average middle-class family, with a confused future.

Joshi wants the girl to know his feelings. He has been trying hard. He attends the same private tuitions as her just to get a glance of her. He follows her to her house everyday without her knowing about this. The story is of struggle, freedom and liberation with a spice of loneliness. 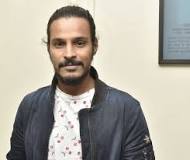 Sujay Sunil Dahake is mainly known for his work as director and as editor for the film Shala, a film that was awarded the Silver Lotus Award for Best Marathi Feature Film at the 59th National Film Awards.