A couple on vacation gets caught in a storm and seeks refuge in a stranger’s house. Through the long night they face issues past and present, after which nothing can ever be the same. The film is Director Aparna Sen’s tribute to legendary Bengali playwright and theatre personality Badal Sircar.

The film SAARI RAAT is a part of ZEE’s Peace Project which aims to bring together film makers, cultural exponents and thought leaders of both the neighboring nations of India and Pakistan on a single platform to facilitate an apolitical exchange environment of peace and harmony. This initiative is in line with Zee Entertainment’s corporate brand philosophy of ‘VASUDHAIVA KUTUMBAKAM’ which means ‘THE WORLD IS MY FAMILY.’ 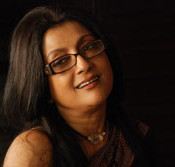 Aparna Sen was born into a family of film lovers. Aparna made her debut as an actress in 1961 while she was still in school, in Satyajit Ray’s Two Daughters. Aparna made 36 Chowringhee Lane, her first directorial venture, which she wrote herself, in 1981. It won the Grand Prix (The Golden Eagle) at the Manila International Film Festival in 1982 while the Kodak award for Cinematography went to Ashok Mehta for his photography in that film at the Hawaii International Film Festival in 1983. Aparna received the National Award for Best Direction and Ashok Mehta the National Award for Best Cinematographer in India for the same film. A prolific filmmaker, Aparna continues to write and direct her films in Calcutta and occasionally acts in films as well.